Because some things are worth fighting for... PAGA Journal

Taking On The Left, One Prayer At A Time

We may not have George Soros’ billions, the MSM bullhorn, or an excess of leftist teachers and professors indoctrinating America’s young. But that’s okay. God doesn’t need money, propagandizing faux outrage, or manipulative/misleading lies to revolutionize hearts and minds. In His wisdom and power, God chooses things despised by the world, things counted as nothing at all, and uses them to bring to nothing what the world considers important (1 Cor. 1:28, NLT). God has promised, which is as good as done, “If My people who are called by My Name humble themselves, and pray and seek My face and turn from their wicked ways, then I will hear from heaven and will forgive their sin and heal their land” 2 Chronicles 7:14.

Can We Pray America Great Again?

Obviously, Pray America Great Again is a play on President Donald Trump's famous campaign slogan Make America Great Again. Though the Trump administration has made tremendous strides in Making America Great Again, all the "winning," has brought to light America's deep corruption, decadence, immorality, and sinister ideologies rotting our great institutions. German theologian Helmut Thielicke preached the following words on "Vicarious Intercession" to a bewildered German congregation sometime during the years of 1942-1945. These words reminded the audience that amid the ravages and poverty wrought upon Germany by a socialist dictator and equally evil ruling class, there is a God in heaven who would hear the prayers of His children, few or many, made on behalf of the nation and its millions. Thielicke's timeless and hope-filled words ultimately ignited the fire that burns in the bones of the Pray America Great Again #PAGA Movement. 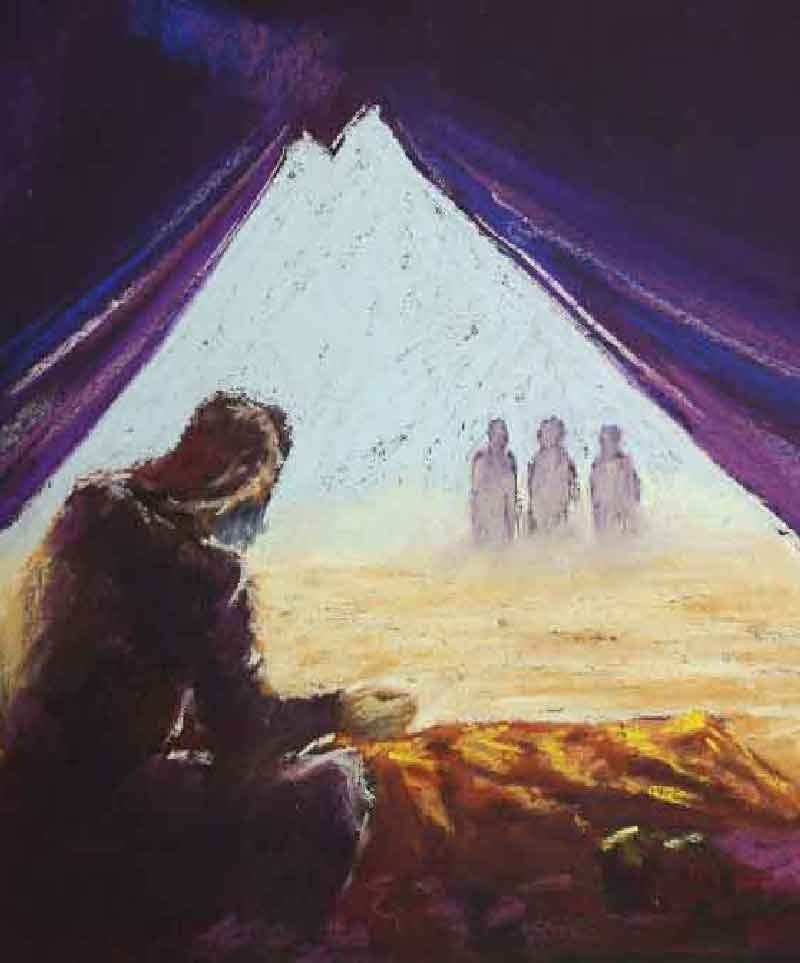 Scripture itself gives us not a few concealed hints at the vicarious existence of those who pray, at the presence of this little company. One such hint is to be seen negatively in the absence of the ten righteous in Sodom and Gomorrah (Genesis 18:16ff), who, if they had been present, would have been able to change the destiny of this world in microcosm. These disturbing ten might not have had opportunity to preach in the overpowering flood of ungodliness. They might not have been able to change the destiny of their world by their message. But they would have been present before God; and because of the intercession of Abraham this would have been enough—vicarious representation. -Helmut Thielicke, “Vicarious Intercession” in The Silence Of God 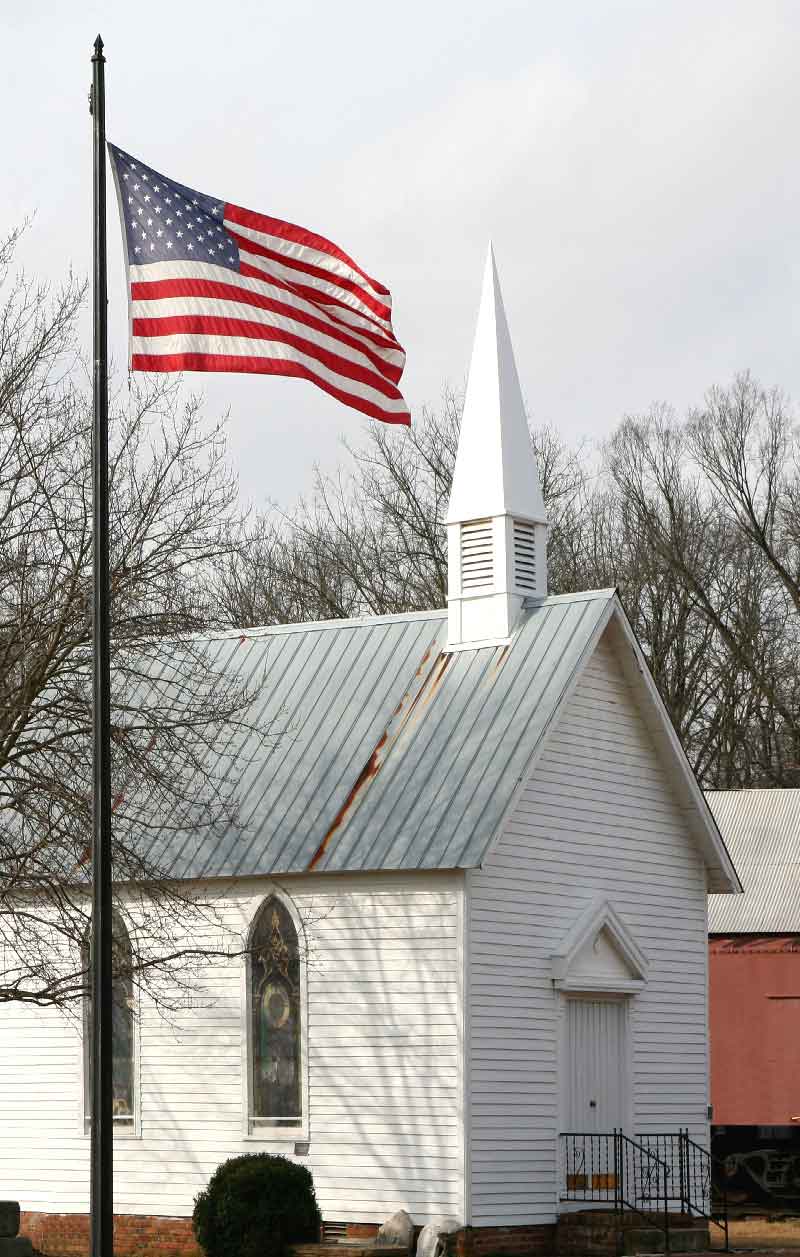 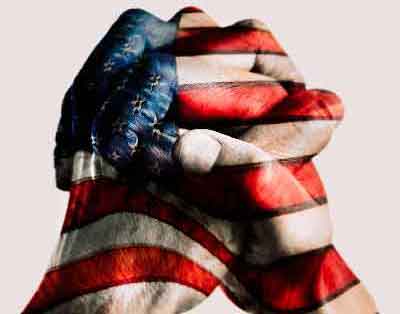 Helmut Thielicke (1908-1986) understood the leftist destruction of a nation. He experienced it firsthand. Look at the years marking his life(!). Thielicke’s phrase “overpowering flood of ungodliness” is not over-dramatized language to describe a secular nation. He witnessed the rise, the dictatorship, and the destruction of Germany under the so-called Third Reich—”the overpowering flood of ungodliness.” Far from being a casual remark, the phrase castigates the tyranny of socialist/communist/Marxist governments. An ideology that the modern Democrat Party shares with Adolph Hitler. An ideology the radical left is attempting to unleash on America.

How dreary and dismal life becomes when we humans want to decide what is worthy and what unworthy. We Germans know where that leads—we have lived through it. -Helmut Thielicke, I Believe: The Christian’s Creed

Thielicke’s original audience understood “overpowering flood of ungodliness” all too well. Hitler’s Marxist Nazism/Socialism brought on the utter destruction of Germany within the very short time frame of 1933-1945. 12 years(!). 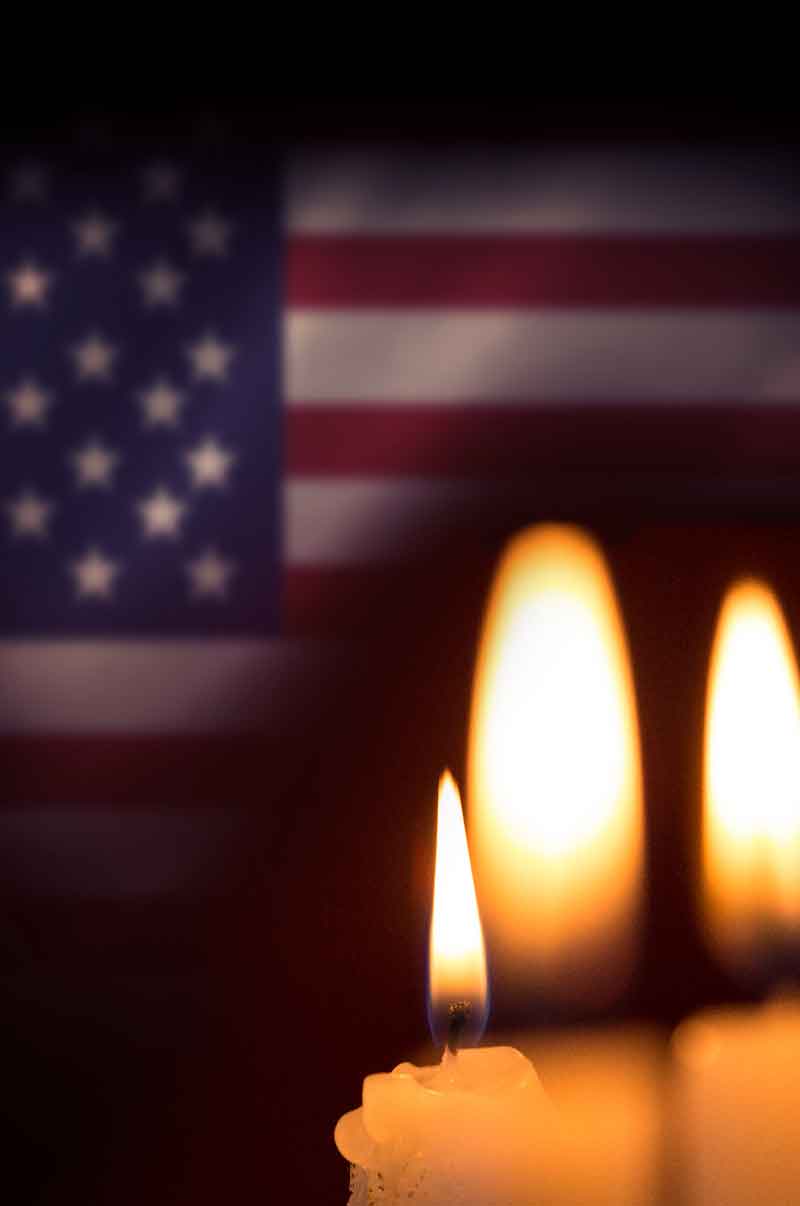 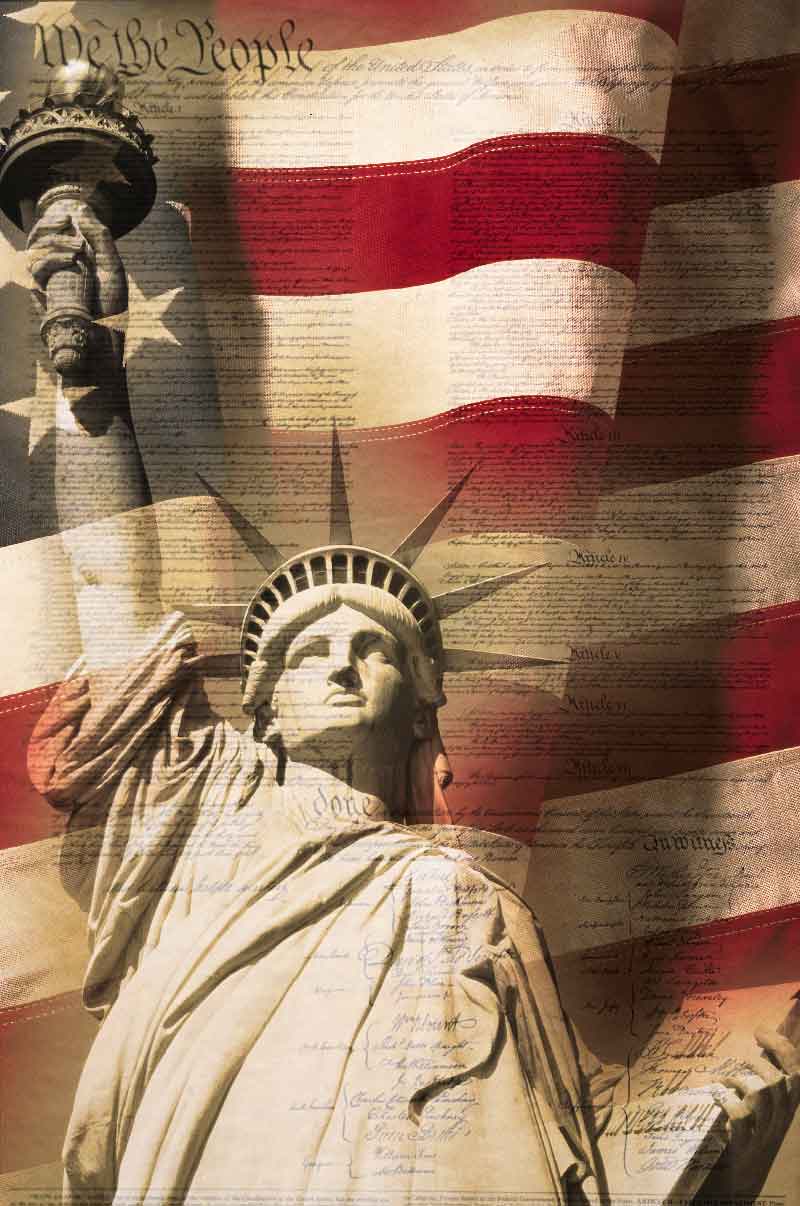 On November 7, 2016, millions of American Christians joined for a day of fasting and prayer. And on that day, we basically kicked some major devil butt. The following day, November 8, 2016, Election Day, represents a day considered by 81% of U.S. Christians—Protestant and Catholic—as a miracle from God. It is as if God thundered from heaven and shook Capitol Hill: “I have heard a great outcry against the evil, socialist, power-hungry, greedy, murderous hildebeast, who will take this land of freedom and make it into her own image. I have heard the prayers of my people and I shall never allow such great evil to destroy your nation.” The OT contains many instances of God routing enemies before they could attack. On November 8, 2016, we witnessed one in real-time.

Then came November 3, 2020. For four years, the minions of Satan plotted, connived and devised scrupulous and underhanded ways to steal the 2020 Presidential election. By 10:00 p.m. on November 3, President Trump had a sure victory. But five large cities in five counties in five states mysteriously stopped counting votes at 10:00 p.m. Five large cities all controlled by Democrats. And the party of Satan did the unthinkable, they stole the 2020 Presidential Election.  They subverted the will of the American people. But God truly works in mysterious ways. With Joseph we say:

As for you, you meant evil against me, but God meant it for good, to bring it about that many people should be kept alive, as they are today. Genesis 50:20

Because of the multiple disasters brought about by the stolen election’s installed puppet, literally millions of eyes are being opened. People are awakening to the nefarious and evil intentions of globalists and Democrats who do their bidding. The formation of a remarkable coalition, that would otherwise have been impossible, is now a reality.

Though surrounded by God’s grace, the war still rages. And this war will be fought like the one in November 2016—in closets, on knees, around tables, in churches, heads bowed, lying prostrate, and with hearts lifted up to God.

Click on the red + below for a detailed description of each principle.

#1 Our Struggle Is Not Against Flesh and Blood... Ephesians 6:12

We are not fighting against flesh and blood but against the evil powers of darkness who animate and empower leftists, Democrats, Marxists, socialists, progressives, communists, globalists, liberals, put-your-label-here, they are all the same. The (little g) god of this world has most definitely blinded their minds (2 Cor. 4:4).

Sadly, these people are separated from God which makes our war even more urgent. Look at their faces. They are human (I think). Seriously, they have longings like all people—for approval, purpose, to be loved and accepted. Christians take these things for granted because most of us have them in abundance, not only from our church community, but from our Lord Jesus Christ.

Amid the screams, protests, violence, unreasonableness, lack of critical thinking, hypocrisy, and inability to see the trajectory of leftist policy (even when it stares them in the face!) the radical far-left Dems and liberals actually do have deep human longings. This means that common ground exists. But shhhh, don't tell them. It may be the door God opens. But we've got to fight. For them and for us. And the war is impossible to fight on an earthly level.

In the movie War Room, the heroine prayer warrior, Miss Clara, states emphatically that praying people must have a “prayer strategy.” After trying many things that got her nowhere, she says:

Then I started really studying what the Scriptures say, and God showed me that it wasn’t my job to do the heavy lifting. No. That was something that only He could do. It was my job to seek Him, to trust Him, and to stand on His Word. (Chris Fabry, War Room: Prayer Is a Powerful Weapon, Kindle Edition, 90.)

This valiant warrior also shares her method for developing a prayer strategy. Her husband's position in a WWII War Room served as an analogy for Miss Clara's own approach to combating the enemy through prayer:

[Miss Clara] knew enough about warfare to realize that tucked away in some place protected from the onslaught of bullets and bombs, someone had developed a strategy.  …She pictured her husband staring at maps and coordinates. Sweaty and tired and scared, he and his men would analyze what the enemy was doing and mobilize resources to push back against their advance (Fabry, 2-3).

Analyzing what the enemy is doing in America, immediately, we recognize multiple areas under heavy artillery fire that need the power of God to push back against their advance: the swamp of Washington D.C., leftist judges, state governments, healthcare system, southern border, social justice activism, persecution of Christians and Christianity, anti-Semitism, racism against whites and blacks, race baiting from elected officials and paid hacks, disregard for authority, disregard for human life, the welfare state, universities and leftist professors, all educational levels' indoctrination of leftist ideas and rewriting of history, mainstream media, drug epidemic, the popularity of socialism, political NGOs, political corruption, anti-American citizens, the unholy alliance between the left and bloodthirsty pagans, illegal aliens, anti-First Amendment leftists, intolerant leftists, leftist violence, subversion of the Constitution by Democrats and their donors, "progressive" churches who worship the golden calves of leftists and do their will in return, etc.

The old dragon has trained, hardened, and stationed his sinister soldiers throughout these areas (and others). Though satan stands defeated, there’s definitely more going on than we can see.

Principle #3 could be called the secret weapon for leftist destruction. Though not really a secret, it is a biblical principle that is oftentimes overlooked.

My Father is working until now, and I am working. Truly, truly, I say to you, the Son can do nothing of his own accord, but only what he sees the Father doing. For whatever the Father does, that the Son does likewise. For the Father loves the Son and shows him all that he himself is doing. And greater works than these will he show him, so that you may marvel (John 5:17, 19-20).

The authors explain “…It describes a love relationship through which God accomplishes His purposes. Once you have an intimate love relationship with God, He will show you what He is doing. Your job as a servant is to follow Jesus’ example: Do what the Father is already doing—watch to see where God is at work and join Him!”

There are many examples where God is already working and certainly there will be more. Here are only a few: March for Life, Candace Owens’ grassroots movement Blexit, Campus Reform, conservative Supreme Court justices and other federal judiciary appointments, the revealing of the Deep State and overall corruption of Washington D.C., etc. These examples have received national attention. Only God knows how many small battles are fought and won every day that we never hear about. Don't doubt this is happening!

Thoughts and prayers to drive the left even crazier.  And who knows? Maybe some will turn to worship God instead of government? 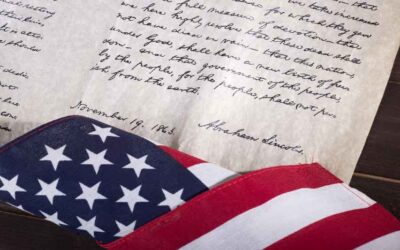 Gettysburg Remembrance Day November 19: Send The Eternal Winds Upon Us Again Skip to prayer.President Abraham Lincoln, Gettysburg Address, November 19, 1863 Given at the dedication of Gettysburg Battlefield as a national military cemetery. Four score and seven years... 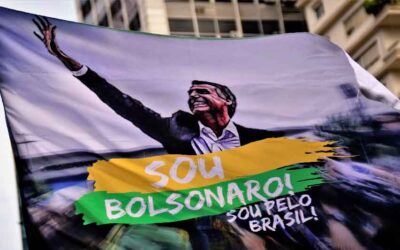 Praying For Brazil: Election Day October 30, 2022 Praying America great again includes praying against satanic forces throughout the world, especially in those nations with Christian brothers and sisters. One such country is Brazil. Out of a population of... 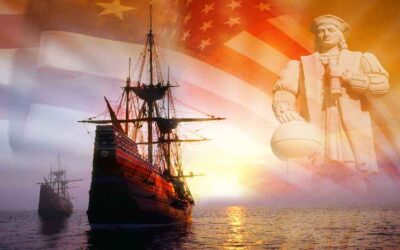 Columbus Day: Go Forward Prayer: Praise Your Name Lord God of all the earth. You are in all, over all, and above all. How we thank You for always being with us. Sometimes we may not be able to feel Your presence, but the fact remains, according to Your own Word, You...

Subscribe to Pray America Great Again's newsletter or follow us on social media to stay up to date with the latest from #PAGA.